May 17, 2021 (TORONTO, ON) – A large majority of Canadians 55 and up say government-run retirement savings plans will leave them unable to afford retirement and want an innovative solution to fulfil their long-term financial needs.

According to a new HomeEquity Bank-commissioned Ipsos survey, 79% of older Canadians say they can’t bank on Registered Retirement Savings Plans (RRSPs), the Canada Pension Plan (CPP) and Old Age Security (OAS) for a comfortable retirement. That means it’s time to provide them access to alternative lending options for their retirement planning toolboxes.

More than four-in-10 Canadians over 55 believe one of those options includes the ability to access the equity in their homes without having to sell. As it stands, the conventional approach to using homeownership as a way to fund retirement is to sell and downsize because that’s long been considered the right thing to do.

But that mentality is starting to change, as evidenced by 40% of older homeowners saying they would rather stay put in their homes and benefit financially by borrowing against the equity instead of trying to downsize in Canada’s red-hot real estate market.

“Downsizing isn’t as attractive as it used to be,” says HomeEquity Bank’s President and CEO Steven Ranson. “Given the amount of risk associated with moving and finding another suitable home, more than a quarter of older homeowners are considering accessing the equity in their homes instead of selling to help fund their retirements.”

To help further shift perceptions about active homeownership in retirement, HomeEquity Bank re-enlisted the support of its creative agency of record, Zulu Alpha Kilo, to develop a series of national television commercials that directly address the pressure 76% of older Canadians say their demographic is facing to sell the family home.

“The home is quite often the largest investment someone makes in their lifetime, and home ownership a major source of pride,” says Yvonne Ziomecki, Chief Marketing Officer and Executive Vice President at HomeEquity Bank. “But this whole notion that when you reach a certain age, you should sell and move out is ridiculous. We want to deliver that message in a manner that breaks down these antiquated stereotypes about retirees not being able to live comfortably at home on their own terms.”

The new commercials build on the success of HomeEquity Bank’s brand platform launched three years ago and continues to drive home the overarching message that older Canadians are standing their ground when it comes to retiring in the home they love.

“This campaign reinforces the true value of your home, while continuing to empower retirees,” says Zak Mroueh, Founder and Chief Creative Officer at Zulu Alpha Kilo. “The work draws from true insights and scenarios that this audience routinely face. No one should be pressured to sell their home. Especially those in retirement.”

The first of three TV spots to be aired stars celebrated Canadian actress Jayne Eastwood. She plays a woman named Doris having a witty back-and-forth with her granddaughter who passes along the message that mommy thinks it’s time for grandma to move out of her house and into a retirement home to enjoy activities that are “more age-appropriate.”

“It’s high time we put an end to typecasting older homeowners as helpless retirees who can’t manage their own affairs at home. Having the opportunity to lend a hand in telling this story was too good to pass up,” says Eastwood of the commercial.

The campaign also includes an online video series titled Conversation Stoppers with Doris where she dishes out expert advice on how to respond to those who think they know best when it comes to the homeowner’s happiness and well-being in retirement.

HomeEquity Bank commissioned Ipsos to survey Canadians 55+ about their attitudes around the affordability of living a comfortable retirement lifestyle. All figures cited in this release are based on those who have formed an opinion on the matter and exclude ‘don’t know’ responses.

HomeEquity Bank is a Schedule 1 Canadian Bank offering the CHIP Reverse Mortgage and CHIP Open solutions. The company was founded more than 30 years ago as an annuity-based solution addressing the financial needs of Canadians who wanted to access the equity of their top asset – their home. The Bank is committed to empowering Canadians’ age 55 plus to live the retirement they deserve, in the home they love. HomeEquity Bank is a portfolio company of Birch Hill Equity Partners Management Inc., a mid-market private equity firm based in Toronto with more than $3 billion in capital under management. For more information, visit www.chip.ca 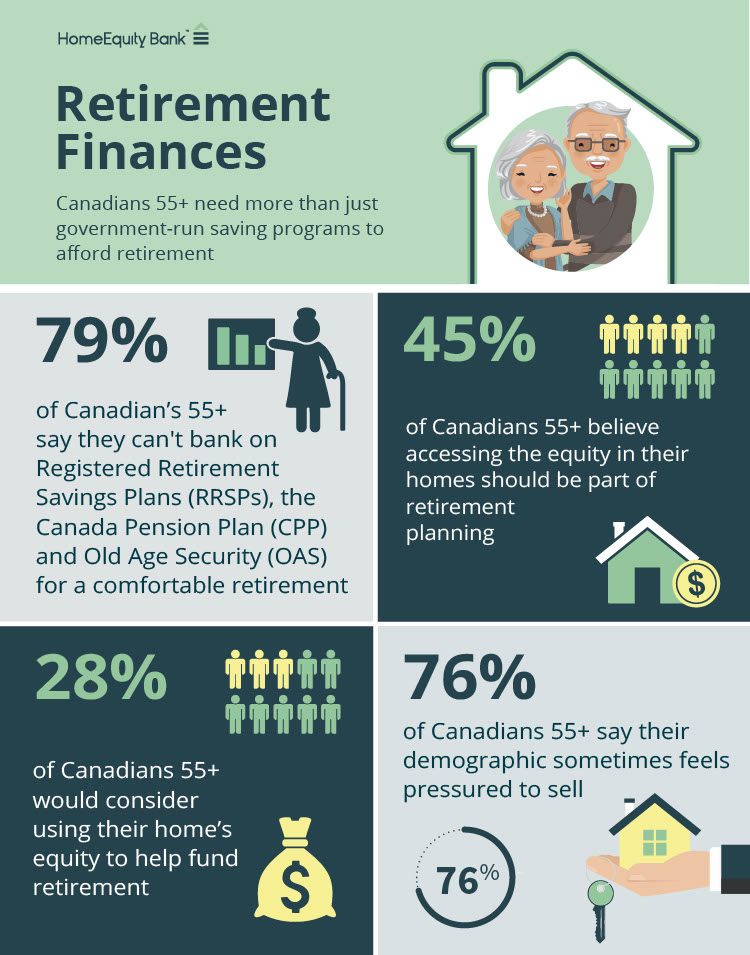