HomeEquity Bank to be acquired by Ontario Teachers’. Learn more.

Canadian Seniors Want To Spend Less During The Holidays

TORONTO, December 21, 2016, – The holidays may not necessarily be a merry time of year for all Canadian seniors according to a recent survey of attendees at the Toronto ZoomerShow, ZoomerMedia’s lifestyle expo for people aged 45 plus. The survey, sponsored by HomeEquity Bank, providers of the CHIP Reverse Mortgage™, found that many seniors overspend during the holiday season. In fact, 26% of respondents described the holidays as financially “very stressful”.

The results indicate that respondents would prefer to spend less than they actually end up spending during the holiday season. Results also show a discrepancy between male and female spending. On average, men spend $2,898 over the holidays, while women spend $2,248. This difference in spending levels may illustrate that women work harder to keep on budget, which in turn may result in higher levels of stress.

Survey respondents’ average holiday spending totaled $2,464, which suggests that expectations for spending over the winter holiday season are generally established and require some degree of financial planning.

Other data points include:

“An individual’s financial situation can really come into focus during the holidays – whether it be buying gifts for grandchildren or paying for trips to visit loved ones. This time of year can create financial strain,” said Yvonne Ziomecki, SVP, Marketing & Sales at HomeEquity Bank. “After the holidays, our phones light up with many seniors calling us to help with their holiday bills. We work with our clients to help them find financial solutions to ensure they are not stressed about money they have spent over the holidays.”

HomeEquity Bank, a fully-regulated, Schedule 1 Canadian bank, is the only national provider of the CHIP Reverse Mortgage™ solution. Founded 30 years ago, HomeEquity Bank has been helping Canadian homeowners aged 55 plus access the value of the equity they have in their homes, while still owning their homes until they make the decision to sell. 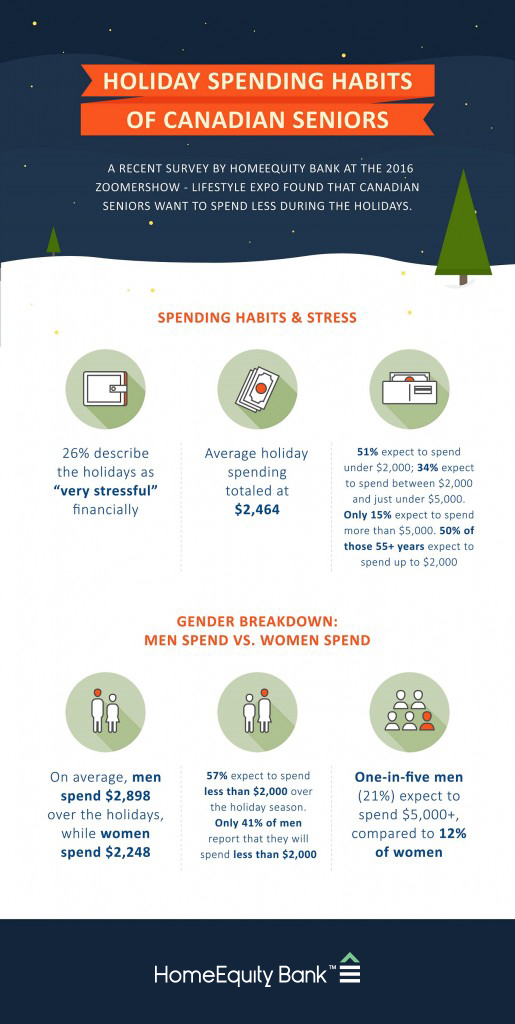